This was the first song I wrote as a believer in Christ. I took the lyrics from Psalms 134 and 138. Below is a brief word to shed light on what the chorus can mean to us given its Old Testament roots. I hope this song will serve as an inspiration for many to truly bless the LORD!

"...Through Him we both have our access in one Spirit to the Father. So then you are no longer strangers and aliens, but you are fellow citizens with the saints, and are of God's household, having been built on the foundation of the apostles and prophets, Christ Jesus Himself being the Cornerstone, in Whom the whole building, being fitted together, is growing into a holy temple in the Lord, in Whom you are also being built together into a dwelling of God in the Spirit."
Ephesians 2:18-22

"Therefore, holy brethren, partakers of a heavenly calling, consider Jesus, the Apostle and High Priest of our confession; He was faithful to Him Who appointed Him, as Moses also was faithful in all His house. For He has been counted worthy of more glory than Moses, by just so much as the builder of the house has more honor than the house. For every house is built by someone, but the builder of all things is God. Now Moses was faithful in all His house as a servant, for a testimony of those things which were to be spoken later; but Christ was faithful as a Son over His house- Whose house we are, if we hold fast our confidence and the boast of our hope firm until the end."
Hebrews 3:1-6

As a believer I know that when I didn't have faith in Christ I didn't have real access to God, but now in Christ I have access in one Spirit to the Father (Ephesians 2:18). That started with a call to believe the Gospel. When I answered with belief I also became His servant, in part because I was purchased with precious blood, the blood of Christ (1 Peter 1:18-19). Being our sinless, once-for-all sacrifice for sin and our eternal High Priest, He fulfilled the Law and became the way of true, blessed, permanent access to the Father. In the Old Covenant under the Law, only a few men were chosen to be priests in a physical temple in Jerusalem to give gifts and make sacrifices. But now because of Christ and His high priestly work as the Son of God, I have glorious access to God which exceeds all that the Levitical priesthood ever had! Now I can bless the Lord as His servant in His house, and I am now even a part of His house with those who believe in Him for eternal life.

And His fullest, 'truest' holy place was never a part of the temple that was made with hands. Before Christ, everyone was under the Law, and "the Law made nothing perfect" (Heb. 7:19a). Now in Christ Who fulfilled the Law, I can lift up my hands to the real holy place where God is, not a man-made copy, because through faith my sins which prevented a relationship with God were forgiven, no longer a barrier, and I received the Spirit of God to dwell within me.

In Him "we have boldness and confident access through faith in Him" (Ephesians 3:12). I can pray to Him anytime, and I can lift up my hands and bless Him Who because of His love chose to save me and be with me.

Jesus made the way through giving Himself as the perfect sacrifice for our sin. He is our great High Priest, having actually entered the Father's presence for us, both as God and Man, as no other priest could. Through Christ "there is a bringing in of a better hope, through which we draw near to God" (Hebrews 7:19).

I can worship God wherever I am!


"But when Christ appeared as a High Priest of the good things to come, He entered through the greater and more perfect tabernacle, not made with hands, that is to say, not of this creation; and not through the blood of goats and calves, but through His own blood, He entered in the holy place once for all, having obtained eternal redemption."

For while we were still helpless, at the right time Christ died for the ungodly. For one will hardly die for a righteous man; though perhaps for the good man someone would dare even to die.
But God demonstrates His own love toward us, in that while we were yet sinners, Christ died for us.
Much more then, having now been justified by His blood, we shall be saved from the wrath of God through Him.
For if while we were enemies we were reconciled to God through the death of His Son, much more, having been reconciled, we shall be saved by His life.
And not only this, but we also exult in God through our Lord Jesus Christ, through whom we have now received the reconciliation.
Romans 5:6-11

This is a little guitar arrangement of the hymn Channels Only. Hope you enjoy it.
Thank you for listening!

Posted by Josh Garrett at 2:17 PM No comments:

New Recording: By Day The LORD Commands His Love


This is a worship song I wrote a few years back. I haven't written that much for some time, and I see this as the season of my life to finally do this recording project. I am excited to see how the Lord will direct and bless this endeavor. I do not plan to stop recording, as this has been a long overdue work that I believe needs to keep going until the Lord takes me home.

You make the going out of the morning
And the evening to shout for joy (65:8b)
If my breath shall tarry and I awake
With Your likeness I'm satisfied (17:15b)

(Most of the words are from the Psalms using the ESV.)

May this song bless you richly, encouraging you to keep yourselves in the love of God (Jude 21), and may it bless the Lord as His Spirit leads you to sing it to Him.

Posted by Josh Garrett at 7:02 PM No comments:

The first two exercises are regular ascending and descending scales with different rhythmic variations. The third exercise also ascends and descends in thirds. 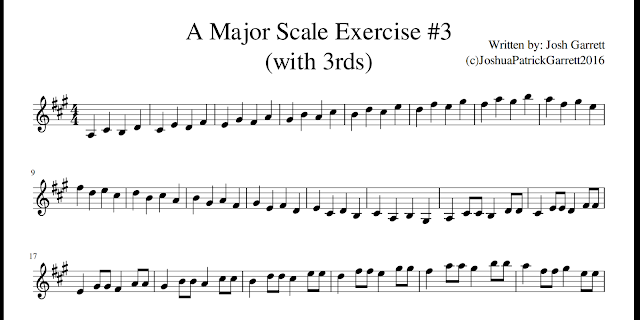 Purchasing: I am making this available for free download, but please leave a donation at My PayPal.

Anyone who becomes a regular student of mine can receive any of these materials. Those interested in taking lessons with me should email me at ThisisJoshGarrett@gmail.com. I can use video conferencing apps like Google Duo and Skype. In-person lessons are available for those near the Chicago, IL 🇺🇸 area.


Posted by Josh Garrett at 9:46 AM No comments:

Here is Part 3 of my series of lessons teaching part of the guitar intro for Amazing Grace that I am writing:


Here is the notation for the piece up to this point:

I don't have all the chord symbols written out. I still have to finish composing this, and decide along the way if I want to create an arrangement of a couple of verses of John Newton's hymn Amazing Grace. I may just write this as an independent piece, where it would be played simply as an intro to the hymn. I would then switch to accompaniment for voice, probably strumming through the chord changes.

I hope you enjoy it and can get something from it that you can use in your own music!

Posted by Josh Garrett at 9:37 AM No comments:

My arrangements of Bach's 69 chorale melodies with figured bass are now available:

These pieces can be played by any treble clef instruments, but they were arranged with in the guitar in mind.

This first edition contains sheet music only. I want to share this now with many that I know will enjoy the collection for years to come. It was a labor of love, and I pray that it will enrich the lives of those who perform them, teach them, and listen to them! 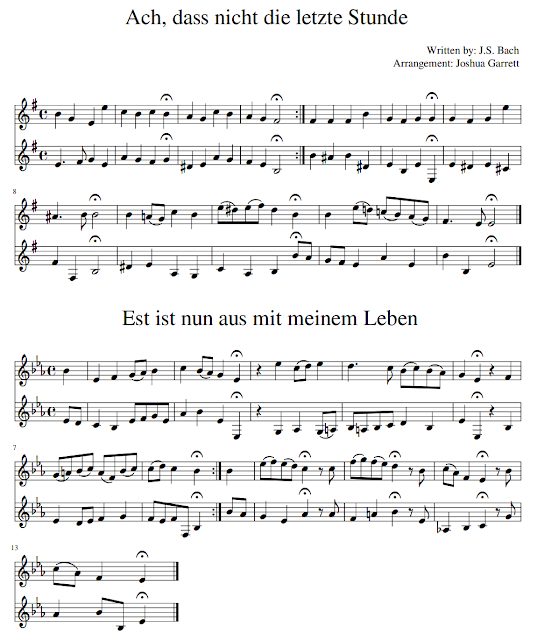 All 69 of Bach's two part Chorales have been transcribed for two treble clef instruments, and are formatted like the sample pieces above.

The ebook will be emailed after receiving payment. If you have any questions or comments, please leave them below, or email me at Thisisjoshgarrett@gmail.com

Thank you for your support!


Grace and Peace,
Josh Garrett
Posted by Josh Garrett at 3:00 PM No comments:


This video is part two of my teaching series on a guitar arrangement I wrote in D major. Below is the notation for what is covered (including content from Part 1): 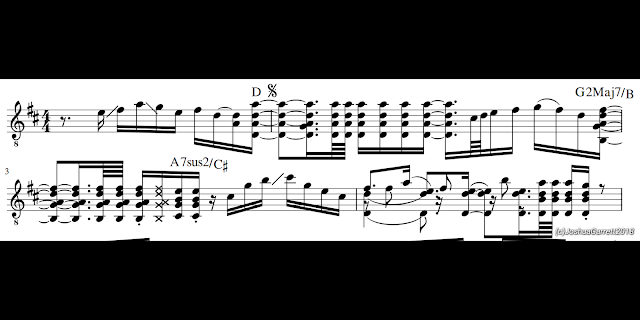 I hope you enjoy it and find it helpful.